You drive in Great Britain on the Left side.

In Great Britain, there is a charge for using some roads depending on the category of vehicle and the distance traveled. Some bridges and tunnels are also subject to payment.

Currently, the only UK motorway to be paid is the M6. It is located north of Birmingham.

Map of the M6 motorway in the UK

The price you pay depends on the classification of vehicle you are driving. Rates alter according to the time of day.

The toll system automatically classifies vehicles and charges separate rates for each category, depending on the size of the vehicle. Each time you pass through a Toll Lane our sensors tell us how many axles your vehicle has and how high it is from the point of the first axle. This tells us which class your vehicle falls into.

* The measurement is taken from the ground to the top of the vehicle at the point of the first axle:

Map of the M6 motorway showing all entries and exits (283 Кб).

The credit card symbol is located in the upper left corner. The following credit cards are accepted:

The symbol for automatic payment (letter T) is located in the lower left corner.

The symbol for manual payment is located in the lower right corner.

Coins and banknotes are accepted. Exchange possible. A check is issued.

In the UK, in addition to the M6 motorway, some bridges and tunnels are subject to payment.

Toll rates on tunnels in the UK

Toll rates on bridges in the UK

For motocycles bridges are free.

Since March 1, 2013, the Itchen bridge toll collection system has become fully automatic. Now the fare can only be paid with coins (accepted coins in denominations of £ 2, £ 1, 50p, 20p, 10p) or with a SmartCities card.

Travel over Tamar Bridge is only paid when driving in the direction from Saltash (Cornwall) to Plymouth (Devon).

In the UK, there are several bridges on minor roads, which also incur fare.

The Eurotunnel passes under the English Channel. Its length is about 51 km, of which 39 km is under the bottom of the strait. The tunnel connects continental Europe with the UK.

The toll includes car transportation, up to 9 passengers and luggage. There are several types of tickets:

On the video you can see travel through the Eurotunnel from England to France (more video at our YouTube channel).

You only need to pay once, no matter how many times you drive in and out of the Congestion Charge zone on the same day.

If you don't pay by midnight on the charging day after you drove in the zone, you'll get a Penalty Charge Notice (PCN). The amount of the fine is £ 160 (€ 182). It must be paid for 28 days. If you pay within 14 days of the date of service you will receive a 50% discount, the amount that must be paid being the discounted amount for the contravention date.

You don't have to pay the Congestion Charge or register with us if the vehicle is recorded at the DVLA in one of these categories:

The boundaries of the zone are clearly marked with special signs. There are no barriers or special cabs to levy at the borders of the London toll area. Borders are controlled by cameras that record all the numbers of passing cars, on the basis of which the necessary fee is then paid. The cameras recognize both British and other European numbers.

You can pay the fee online here

The Ultra Low Emission Zone (ULEZ) replaced the T-Charge on 8 April 2019. It operates 24 hours a day, 7 days a week, every day of the year (except Christmas Day), within the same area as the Congestion Charge zone.

Most vehicles, including cars and vans, must comply with ULEZ emission standards. Otherwise, drivers must pay a daily fare within the zone.

If your car does not meet the ULEZ requirements, then for each entry you need to pay £ 12.50 (€ 14). The fines are the same as for entering the Congestion zone.

A daily charge runs from midnight to midnight. If you drive within the ULEZ area across two days, for example before midnight and after midnight, you will have to pay two daily charges. These are in addition to any Congestion Charge that applies.

Owners of non-UK registered vehicles must also pay the ULEZ charge to drive within the zone if they do not meet the emissions standards. Register your vehicle before you start and you will know about pay ULEZ or LEZ charges for your vehicle, and you believe that's not the case.

The Low Emission Zone (LEZ) operates to encourage the most polluting heavy diesel vehicles driving in London to become cleaner. The LEZ covers most of Greater London and is in operation 24 hours a day, every day of the year.

Before parking, make sure that you do this in an authorized place. There are many traffic policemen and fines are very high.

In most parking lots at the entrance, a ticket is taken and payment is made upon departure. Also in the UK there are "pay and display" parking lots. You need to buy a ticket for a certain period of time and placed under the windshield.

The double and single yellow and red lines along the edge of the road are used to show where motorists can and cannot park: 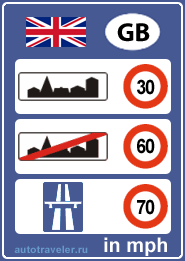 Standard speed limits in Great Britain (unless otherwise indicated on the signs).

On vehicles with more than 8 seats, a speed limiter must be installed to limit the fuel supply to the engine in order to prevent exceeding the maximum allowed speed.

The maximum permitted level of alcohol in the bloodstream is 0.8 ‰.

The maximum permitted level of alcohol in the bloodstream in Scotland since December 5, 2014 – 0.5 ‰.

Police may ask a driver suspected of having committed a violation to take a breath test.

The same punishment threatens in case of refusal to pass the test for the presence of alcohol.

In the event of death by negligence while exceeding the maximum permissible level of alcohol, you may face imprisonment of 14 years, an unlimited fine and the withdrawal of a driver’s license for 2 years.

The police have the right to conduct tests to identify a driver who may be under the influence of drugs.

Foreign drivers will be required to pay a fine of a fixed fine or £ 300 (€ 341) as a deposit for a possible legal fine. Deposit must be paid on the spot.

Motorists must use dipped headlights between sunset and sunrise at night (half an hour after sunset and half an hour before sunrise) on all roads without street or road lighting.

Motorists must use the dipped headlights at night, even on lighted highways and on roads with a speed limit of more than 30 mph/h.

The headlights of cars with a left-hand drive must be sealed with adhesive tape so as not to blind the oncoming drivers. Otherwise, you run the risk of being stopped by the police and subsequently fined up to £ 1,000 (€ 1,136).

Children between the ages of 3 to 11 years old and height up to 135 cm must use a child car seat.

Children under the age of 3 years must be transported in a child restraint device appropriate for their weight in any vehicle (including a minibus).

Before installing a child seat in the front seat, the front airbags must be deactivated. In the United Kingdom, it is only permitted to use child seats in accordance with EU standards (marked with a capital letter ‘E’ in a circle).

The use of seat belts is mandatory for front and rear passengers.

If the car does not have seat belts (for example, this is a classic car), then it is not allowed to transport children under the age of 3 years. Children over 3 years old are only allowed in the rear seats. These rules apply only if the car was originally released without seat belts.

It is forbidden to use a telephone communication device while the vehicle is in motion, not equipped with a technical device that allows negotiating without using hands.

As an exception, you can use the phone while driving in the following cases:

It is forbidden to use the phone even if you stop at a traffic light or in traffic.

The degree of tinting the windshield and front door glass depends on the time of the first registration of the vehicle.

On the windshield, it is allowed to apply a light-protective film with a width of not more than 6 inches (15 cm) from the upper edge outside the coverage area of ​​the wipers.

There are no restrictions for tinting the rear windshield and rear door windows.

If the degree of light transmission of the windshield and glass of the front doors is less than permissible, then in the event of a stop, further movement will be allowed only after removing the tint film.

Foreign drivers who commit traffic violations will have to pay a deposit of a fine of £ 300 (€ 341) as a guarantee of a potential fine in court. Deposit must be paid on the spot.

When determining speeding in the UK, the following error applies - 10% of the speed limit plus 2 mph/h.

Gasoline with an octane number of 97 is poorly distributed in the UK, so its average prices can fluctuate greatly.

It is forbidden to transport gasoline in cans on ferries.

The use of winter tires in Great Britain is optional.

Winter tires make sense if you are heading to the northern areas of Scotland, where winter conditions will last longer.

The use of studded tires is permitted, but due to mild weather conditions is hardly necessary. Spike tires should not damage the road surface. From the point of view of the law, there are no speed limits for cars with studded tires.

Snow chains may only be used with summer tires if the road is completely covered with snow or ice.

Although not required, it is recommended that you have a warning triangle, a first aid kit, a fire extinguisher and a reflective vest in case of breakage. Motorists should not use the warning triangle on the motorway.

The use of radar detectors is permitted.