There is no charge for driving foreign vehicles on Belgian roads.

The fee is charged only for travel on certain sections.

You have to pay for the passage through the Liefkenshoek Tunnel, which is located near Antwerp and runs under the Scheldt River. The Liefkenshoek tunnel is 1.37 km long and is part of the R2 ring road around Antwerp.

Tariffs are divided into 2 categories. Unlike most European countries, when determining the category, only the height of the vehicle is taken into account - up to 3 m and above. The exact height is measured electronically.

Other criteria (number of axles, length, weight or their combination) are not used to determine the category!

The toll station has a total of 18 gates, with 9 lanes in each direction of travel (numbered from 1 to 9).

Lanes 1 through 3 are for credit card payments (indicated by a blue arrow). Also, these lanes can be used by vehicles equipped with the Telepass system.

Lanes 4 through 5 are for cash payments (indicated by a green arrow).

Lanes 6 to 8 are intended for vehicles equipped with the Telepass system (indicated by a yellow arrow).

Payment is due upon entry. Euro cash is accepted, as well as the following currencies: US dollar, Danish krone, Swedish krona, Swiss franc and British pound sterling. All currencies are converted to euros!

The following credit cards are accepted for payment:

Payment is made automatically when driving through the gate.

LEZ - «Low Emission Zone». This term is used to refer to a situation where polluting vehicles are not allowed to drive in a given city or areas of that city. This is one of the measures taken in many European cities to improve air quality.

From 1 January 2018, the use of the most polluting vehicles in the Brussels LEZ is prohibited. This applies to passenger cars, minibuses ≤ 3.5 tonnes, as well as buses registered both in Belgium and abroad.

To enter such a zone, you must register using the electronic form on site . Registration is free and will be valid for 3 years.

If a vehicle enters a low emission area and has not been registered in advance, a fine of € 150 may be imposed (even if the vehicle meets the conditions for access to the low emission area). Any inaccurate information provided at registration will be subject to an administrative fine of € 25.

If the vehicle does not meet environmental requirements, then a one-day pass must be purchased to enter such an area. The cost of the pass is € 35 per day.

The checks are carried out on the basis of car license plates using cameras. A network of 191 cameras was installed throughout the Brussels Region (both at the border of the zone and within it).

In addition to Brussels, there is a similar ecological zone in Antwerp.

Parking is paid on most central streets in cities. After payment, you need to put a receipt under the windshield so that it can be clearly seen from the outside.

On some streets, parking may be free, but limited in time (Blauwe zone). In this case, you must put a blue cardboard clock under the windshield, on which the arrival time is set. Blue watches can be purchased at gas stations, kiosks, and police stations.

Be aware that temporary signs may be placed on the left side of the road to indicate that the road must be clear for road works. Drivers who ignore this requirement risk their vehicle being towed to a fine parking lot.

Motorcycles can be parked on the sidewalk in the city center if there is at least 1.50 meters of free space for pedestrians. 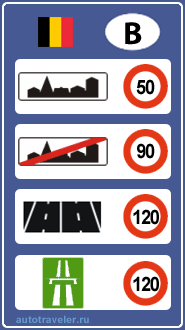 Standard speed limits in Belgium (unless otherwise indicated on the signs).

Cars (to 3.5 tons) and motorcycles:
Cars with trailers:


[1] From January 1, 2017, the maximum speed outside the village in Flanders (administrative region in the northern part of Belgium) is 70 km/h.

The minimum speed limit on the motorway is 70 km/h.

In the area covered by the "Residential area" sign, the speed of vehicles must not exceed 30 km/h.

Be careful — there are a large number of speed cameras in Flanders and when approaching Brussels.

The maximum permitted level of alcohol in the bloodstream is 0.49 ‰.

If your driving experience is less than 2 years, there is no penalty and you are automatically prosecuted.

Children from 3 to 8 years old can only be transported on a motorcycle in child restraints appropriate for their weight.

The carriage of children under 3 years of age on motorcycles is prohibited. This rule also applies to children carried in a stroller.

Seat belts is mandatory for both front and rear passengers.

It is forbidden to use a mobile phone that is not equipped with a technical device that allows negotiations without the use of hands while the vehicle is in motion.

The degree of light transmission of the front and front side windows must be at least 70%.

For rear windows, the degree of light transmission is not regulated.

If the rear windshield is tinted, it is necessary to have a rearview mirror on the side opposite to the driver's side.

Motorcyclists are required to wear not only a helmet, but also gloves, a long-sleeved jacket, long trousers or overalls. In addition, boots or boots must protect the ankles.

Failure to comply with these rules will result in a fine of € 50.

In case of traffic jams, motorcyclists are allowed to move between lanes. At the same time, the speed of their movement should not exceed 50 km/h, and the difference in speed with slow moving or standing vehicles should not be more than 20 km/h.

Motorcycles, mopeds and bicycles are allowed to use the lanes intended for buses, except for cases when this is prohibited by appropriate signs.

Motorcycles with a sidecar are allowed to move with a trailer if the wheel of the sidecar is equipped with brakes.

Police officers in Belgium have the right to collect fines on the spot. The police officer must issue an official confirmation stating the amount of the fine. The motorist can refuse to pay the fine on the spot.

A foreign motorist who refuses to pay a fine on the spot may be asked to pay a deposit. And if the deposit is not paid within 96 hours, the vehicle will be confiscated by the police until it is paid. Fines can be paid in EUR cash (foreign drivers only), postal order or credit/debit card.

Traffic violations in Belgium are divided into 4 groups:

* when paying on the spot.

A fine on the spot will not be charged if the offender is under 18 years of age or damage is caused to third parties.

If the speed is exceeded over 20 km/h in built-up area and over 30 km/h outside it, the driver's license is revoked.

If the speed exceeds 30 km/h in built-up area and over 40 km/h outside it - a mandatory suspension from driving.

Fines for violation of traffic rules in Belgium in English (853 Кб).

Unleaded petrol (95 and 98) and diesel are available in Belgium. There is no leaded gasoline. There are LPG stations.

Official fuel prices are regulated by the government. The official price is the maximum permitted price for petroleum products.

It is allowed to carry gasoline in cans in a car, moving around the country, and is prohibited when transporting by ferry.

The use of winter tires in Belgium is optional, but recommended from October 1 to April 30 in mountainous areas.

The use of studded tires is prohibited, but in exceptional cases (in difficult weather conditions) it can be allowed from November 1 to March 31 for vehicles weighing up to 3.5 tons.

Cars equipped with studded tires must have a «60» speed limit sticker on the back. They are subject to the following speed limits - 90 km/h on motorways and 60 km/h on normal roads.

Snow chains may only be used on roads covered with snow or ice.

A new road sign has been introduced to prohibit the use of cruise control on congested highways. Sometimes this sign is installed when carrying out road works on the motorway.

Navigation software is permitted to indicate the location of fixed speed cameras.

Most railway crossings in Belgium are equipped with cameras. Crossing at a time when it is prohibited, i.e. red lights can result in a fine of up to € 2,750.

The use of radar detectors is prohibited. In case of violation, a fine of € 75,000 or imprisonment from 15 days to 3 months. The device is confiscated.