From July 1, 2016, entry to the center of Paris is limited!
To enter the center of the city on weekdays from 08:00 to 20:00, you must purchase an emission sticker of the corresponding category.

In France, there is a charge for using roads depending on the category of vehicle and the distance traveled. Some bridges and tunnels are also subject to payment.

The motorway toll system in France is managed by several companies distributed across different regions. The amount of payment is always displayed on the board at the entrance to the paid site. Payment can be made in cash, by credit card or through remote payment systems.

Toll rates for some motorways at 2022:

The table shows the estimated tariffs for cars, which are calculated once at the beginning of the year on the basis of the site of French motorways, provided that traffic between points is carried out along one motorway.

For example: Paris - Lille (€ 17.30), if you driving on the A1 motorway only . When traveling by another route, the tariff may vary.

The Mont Blanc Tunnel is a highway tunnel in Europe, under the Mont Blanc mountain in the Alps. It links Chamonix, Haute-Savoie, France with Courmayeur, Aosta Valley, Italy, via European route E25, in particular the motorway from Geneva (A40 of France) to Turin (A5 of Italy).

Tunnel prices on the French side are different from Italian prices.

The Fréjus Road Tunnel is a tunnel that connects France and Italy. It runs under Col du Fréjus in the Cottian Alps between Modane in France and Bardonecchia in Italy.

Payment is made from the south side of the tunnel.

Initially, it was a railway tunnel, which was subsequently converted into a car tunnel.

This tunnel was built in 1993 and became the first paid city tunnel in France.

In November 2013, the second paid Prado-Sud Tunnel was opened in Marseille. It has a length of 1,500 m and connects coastal areas with the A50 motorway.

Access to these tunnels is permitted only for cars, vans and lorry with a height not more than 3.2 m and a total weight of up to 3.5 tons. The maximum speed is limited to 60 km/h.

The Eurotunnel passes under the English Channel. Its length is about 51 km, of which 39 km is under the bottom of the strait. The tunnel connects continental Europe with the UK.

The toll includes car transportation, up to 9 passengers and luggage. There are several types of tickets:

Tunnel on motorway A86

The A86 motorway, which is the ring road around Paris, has a toll tunnel. Its length is about 10.5 km.

Learn more about tunnel toll on the A86 motorway in French (151 Кб).

The Caluire Tunnel is part of the Périphérique Nord paid complex, which includes 4 tunnels with a total length of 6.5 km, 2 viaducts and 2 toll stations. It connects the A6 motorway (Paris - Marseille) with the A42 (Geneva) and A43 (Grenoble - Chambery) motorways.

Millau Viaduct is a bridge structure (viaduct) passing through the Tarn Valley near the city of Millau in southern France (Aveyron department). The length of the bridge is 2,460 m, and the height of the roadway at the highest point reaches 270 m above the Tarn River.

Tariffs are approved by the French state and «Eiffage du viaduc de Millau». Toll are updated annually on February 1.

There is only one toll booth for both directions. It is located 4 km north of the viaduct and has 18 lanes (9 in each direction). Payment can be made in cash, by credit card and using remote payment systems.

Normandy Bridge is a cable-stayed road bridge that spans the river Seine linking Le Havre to Honfleur in Normandy, northern France. Its total length is 2,143 metres.

On the video you can see trip across Normandy Bridge in France (Pont de Normandie) (more video at our YouTube channel).

The Tancarville Bridge is a suspension bridge that crosses the Seine River and connects Tancarville (Seine-Maritime) and Marais-Vernier (Eure), near Le Havre. The length of the bridge is 1,420 m.

The bridge connects the mainland to the Rhe island in western France (Charente-Maritime department). The bridge is 2.927 meters long and 42 meters above sea level.

It was originally planned to make this bridge free since 2012, but subsequently this decision was abandoned due to fear of a large influx of cars.

The toll booth is located on the mainland 200 meters from the bridge and has 8 lanes. Payment can be made in cash, by credit card and using remote payment systems. The ticket price includes a round-trip bridge.

You must not stop or park next to kerbs painted with yellow lines. If it is a broken yellow line you can stop there but not park. Time and other restriction are marked on signs nearby. You can only park on the right hand side of the road unless there is a sign which says otherwise. In some cities, some roads have alternate side parking. Look at what everyone else is doing to be sure.

Parking for more than 24 hours at the same place is prohibited (if it is not a long-term parking lot). Parking machines are widespread in France ("horodateurs").

These parking lots work with special credit cards, which can be bought at kiosks with a sign in French "tabacs" (specially licensed tobacco kiosks marked in red).

Unless otherwise specified, parking is free from 7pm to 9am on weekends and holidays, as well as throughout August. In small towns, free parking is often provided from 12:00 to 13:30. Rates and parking times are written on the machine.

The penalty for parking violations is € 17.

In Paris, you can book parking at Parkings de Paris . Parking is selected according to the height of the vehicle. The reservation service is free. 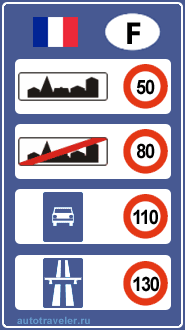 Standard speed limits in France (unless otherwise indicated on the signs).

It is forbidden to drive vehicles on motorways whose speed does not exceed 60 km/h in technical specifications.

When visible on the road less than 50 m, the maximum speed should not exceed 50 km/h, regardless of the type of road.

For cars whith studded tires the maximum permitted speed is not more than 90 km/h.

On motorway sections with more than two lanes, vehicles with trailers are allowed to use only the two rightmost lanes, even for overtaking.

In France, a large number of radars (about 4,000) have been installed on motorways, which record speed violations.

As of May 11, 2011, warning signs for speed cameras are no longer in use. Previously, the signs were placed at a distance of one to two kilometers from the first radar.

The maximum permitted level of alcohol in the bloodstream is 0.5 ‰.

If you caused an accident leading to serious injuries while the blood alcohol level was above the permissible level, then the fine will be up to € 10,000 and imprisonment for up to 2 years.

From July 1, 2012, drivers of all cars and motorcycles (except mopeds) must have a disposable breathalyzer in the car.

This change in traffic rules in France is designed to reduce the number of serious accidents on the roads of France. According to statistics, the number of fatal accidents committed while intoxicated in France exceeds 30%.

The French government strongly recommends the use headlights 24 hours a day for four-wheel drive vehicles.

The fine for driving at night or in conditions of insufficient visibility without light is € 135.

The use of a suitable restraint is mandatory for children under 10 years of age or when the child's height does not allow him to use a seat belt (between 1.35 m and 1.50 m).

Children weighing up to 13 kg should be carried with their backs in the direction of travel.

The driver is responsible for all children in the car under the age of 18.

Seat belts is mandatory for both front and rear passengers. Fine — € 135.

The use of a mobile phone while driving is restricted to use of a hands-free device. Fine — € 135.

It is forbidden to tint the windshield, with the exception of 10 cm of the strip in its upper part for protection from the sun.

The front side windows, in accordance with the requirements of UNECE Regulation No. 43, must have a light transmission of at least 70%.

Tinted rear windows are allowed, if the car is equipped with 2 side mirrors.

Police officers have the right to levy fines for traffic violations on the spot (till € 375). An official receipt must be issued. Penalties are divided into 5 classes.

Vehicles parked in violation of the rules may be taken away by the police at the owner’s expense.

If the offence is more serious, the police can ask for a guarantee if you live abroad and may impound your car in lieu of it.

Unleaded (sans plomb) gasoline (95-E10, 95 and 98) and diesel fuel (Gazole) are available in France. Leaded gasoline is absent. There are gas stations (GPL).

In the country, it is allowed to carry gasoline in cans in a car.

If you break down on a motorway, you are not allowed to call your breakdown company for help. You must use the orange phones on the side of the motorway and you will then be towed to a designated bay where you can meet your emergency organisation.

The use of winter tires in France is optional. They are required in the mountains for a short period of time. On such roads appropriate signs ("Pneus Neige") are installed.

The use of studded tires is permitted from the last Saturday before November 11 until the last Sunday of March. Depending on weather conditions, this period may be extended.

Snow chains may be required in some cases at some mountain passes.

It is recommended to equip your cars with a set of spare bulbs.

At roundabouts with the signs "Vous n'avez pas la priorité" (“You have no priority”) or "Cédez Le Passage" (“Take the road”), vehicles in a circle have priority. In the absence of such a sign, vehicles entering such an intersection take precedence.

Transportation or use of radar detectors is prohibited. Violation of this rule will result in a fine of up to € 1,500 and confiscation of the device.

Starting January 3, 2012, the use of GPS satellite navigation software indicating the location of fixed and mobile speed cameras is prohibited. This function must be deactivated.