There is no toll road in the Netherlands. Only travel through some tunnels is subject to payment.

The toll station is located on the north side of the tunnel. Payment for the tunnel can be made in cash (in euros) or by credit card (American Express, Visa, MasterCard, DKV, Routex and EuroShell).

Pedestrians and cyclists can also use the tunnel.

Parking is not allowed near black and white or yellow curbs. Incorrectly parked vehicles can be towed to a fine parking lot (fine from € 90) or their wheel is blocked. Parking in areas designated for the disabled is punishable by a fine of € 360.

There is an acute shortage of parking spaces in Amsterdam and other major cities. In order to reduce congestion, a system of intercept parking ("Park + Ride") has been introduced in many cities. The driver parks in a specially organized place, outside or on the outskirts of the city, and then gets to the city center by public transport.

From February 1, 2014, the following tariffs have been set for P+R parking:

The cost of the GVB card is added to the parking price:

Below is a map of P+R parking lots in Amsterdam.

Almost all parking in cities is paid. In such parking lots (marked with the appropriate sign "P-Zone") purchase parking tickets. Parking tickets are sold in special vending machines (usually gray or yellow) on the side of the road.

The parking ticket must be placed on the dashboard under the windshield. The absence of such a ticket can lead to the fact that the parking police will block the wheel of the car and issue a fine.

To park in such a parking lot, you need a parking disc with a time stamp. These discs can be purchased from auto club offices, tobacco shops and police stations. 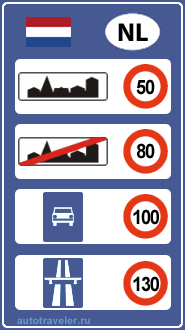 Standard speed limits in France (unless otherwise indicated on the signs).


It is forbidden to drive vehicles on motorways whose speed does not exceed 60 km/h in technical specifications. Fine - € 360.

There are many fixed speed cameras in the Netherlands that take pictures of cars that are not following the speed limits.

Also on 12 main motorways there are systems for measuring average speed over long distances. If the average speed is higher than the maximum allowed, the driver will receive a violation penalty.

Location of speed cameras  in Dutch.

Experiment to increase the speed to 130 km/h

Since March 1, 2011, on some sections of motorways, the maximum speed has been increased to 130 km/h. During the experiment, the impact on infrastructure, traffic safety and the environment was studied.

Sections where the speed was increased to 130 km/h:

Based on the results of the experiment, the government decided to establish from 1 September 2012 the upper speed limit on all motorways - 130 km/h. Exceptions are sections of motorways where this cannot be done due to negative environmental or road safety impacts.

The total length of motorways subject to the new speed limits is about 1,400 km (over 60% of all Dutch motorways).

On 900 km of motorways, the new restrictions will be in effect around the clock. And in the rest of the sections, the speed limit will be adjusted dynamically and applied whenever the traffic situation allows.

The map below shows the motorways in the Netherlands with their speed limit.

The maximum permitted level of alcohol in the bloodstream is 0.5 ‰.

For drivers whose driving experience does not exceed 5 years, as well as for moped drivers not older than 24 years, the maximum permissible blood alcohol level is 0.2 ‰.

Fog lights may only be used if weather conditions require it. The front fog lights can be turned on in fog, snow or rain, i.e. when visibility is severely limited.

Rear fog lights can only be used in fog or snow when visibility is less than 50 meters. Fog lights should not be used during heavy rain.

Children under 18 years of age and less than 135 cm tall may only travel when using suitable child restraint systems appropriate for their weight.

Children under 3 years old can only be transported in special child restraints. Child seats must comply with European safety requirements ECE R44 / 04.

Seat belts is mandatory for both front and rear passengers.

The use of a mobile phone while driving is restricted to use of a hands-free device.

For rear windows, the degree of light transmission is not regulated, provided that the vehicle is equipped with a rear-view mirror on the side opposite to the driver.

Fines can be paid directly to the police officer on the spot of the violation. In the case of illegal parking, the police can impose a fine on the spot or tow the car to a parking fine.

The table of speeding fines in the Netherlands (EUR):

In the country, it is allowed to carry gasoline in cans in a car.

In the Netherlands, there are no requirements for equipment that must be carried in a car.

The use of winter tires in Netherlands is optional.

The use of snow chains is prohibited.

Warning triangle - must be used in case of an accident or stop. Therefore, although it is not on the list of mandatory equipment, it is better to have it in the car.

The use of radar detectors is prohibited. For its use, a fine of € 420 with the confiscation of the device.

On the video you can see Lake Markermeer road (N302) (more video at our YouTube channel).